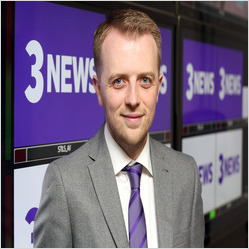 3News is Ireland's largest independent broadcast Newsroom with national, daily news bulletins at 12.30pm & 5.30pm on TV3 and 7pm & 10pm on be3

TV3 is delighted to announce the appointment of Gavan Reilly as 3News Political Correspondent.

3News is Ireland’s leading independent News service and according to a recent Reuters report, the most trusted broadcast News source in the country.

As the Political Correspondent for Today FM, Gavan was responsible for the station's political and current affairs coverage across the daily schedule. He also regularly served as a presenter on Today FM's flagship drivetime programme, The Last Word with Matt Cooper, and on Neil Delamere's Sunday Best.

Gavan has been a regular contributor to TV3 programmes, including Ireland AM and Tonight with Vincent Browne, which in 2015 lauded him for the Best Use of Twitter among Irish journalists.

For the last three years he has been named as Ireland's most influential Twitter user in politics by the Murray Tweet Index.

“I am absolutely delighted that Gavan Reilly is joining 3News as Political Correspondent. He is one of the most gifted journalists of his generation and his massive social media following is an illustration of how well respected and trusted he is by the general public.

Gavan will be analysing political stories on 3News from Leinster House and our new state-of-the-art News Hub at Ballymount but we are equally excited at the prospect of using his talents across the wider TV3 group. This will include making political documentaries and contributing to a wide range of programmes. These are exciting times for our talented news team, especially as we welcome Gavan and prepare to unveil our newly upgraded News Hub on September 4th”.