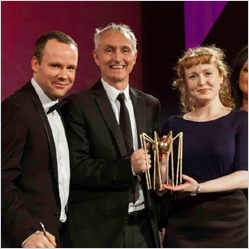 ShowPal™, launched in October of this year, is a brand newsecond screen viewing companion app which proactively delivers rich and related content and information around the show you are watching.

The app uses audio watermark technology in conjunction with your TV to enhance your viewing experience, bringing you closer to the shows you love.

ShowPal™, Ireland’s first TV viewing companion app, developed by Axonista for TV3, was awarded a prestigious Spider Award. The Spider Awards which are held annually, are widely known as the ‘Oscars’ of the digital industry.

The ShowPal™ app, which uses audio watermark technology in conjunction with TV3 to enhance viewers’ experience, won in the News and Entertainment categoryseeing off strong competition from the likes of Gaelport.com, Newstalk Site and Player, Independent.ie, Aertv, JOE.ie, Her.ie and competition from TV3’s own TV3.ie.

The 2013 Spider Awards was held in the Convention Centre Dublin on Thursday night (28th November). This award comes on the back of last week’s Appy Awards where ShowPal™ not only won Best Entertainment App but also walked away with the award for Best Lifestyle App seeing off strong competition from the likes of Sky and Hailo. ShowPal™narrowly missed out on a hat-trick of golds, as it was pipped to the post in the category for Best Tablet App which was scooped by overall Grand Prix winner ‘Life in the Womb’.

Commenting on ShowPal’s latest win, Stephen Grant,TV3 Group Director of Online, and Head of ShowPal™, said: “We are delighted that ShowPal™ won the prestigious Eircom Spider Award (the ‘Oscars’ of the digital industry) in the News and Entertainment category last night to add to the two Appy Awards last week.  As more and more of our viewers are discovering, ShowPal’s great extra content, unique offers and competitions add an extra layer to enhance TV viewing. It’s great the judges in the Spiders have recognised this and I encourage even more of our viewers to download ShowPal™ and experience what the app adds to the viewing experience for themselves.”

ShowPal™is the ultimate second screen app designed to complement and enhance viewers TV viewing experience by delivering the perfect mix of content and interaction while keeping viewers in the loop on the social media buzz around their favourite shows.

ShowPal's innovative use of audio watermarking technology from Irish second screen developers Axonista enables TV3 to proactively deliver viewers rich and related content, and information around the show they are watching. This means the app always provides relevant content, gaming, advertising and social elements to viewers at exactly the right time. From related Twitter feeds, interesting and useful links to articles, celebrity profiles, facts and info, to offering the viewer products associated with the programme they are watching, ShowPal™ adds a layer of enjoyment, engagement and information to enhance the viewing experience, and ultimately bring people closer to the shows they love.

ShowPal™ is FREE for viewers to download and use, and is available on iPhone and iPad. It will launch on Android devices in Spring 2014. For more information about the app itself, visit www.getshowpal.com

Images have been sent to your picture desks.

Sponsored by Ireland INC The 2O13 News & Entertainment Eircom Spider Award is for an innovative News Media website, developed for the distribution of up-to-date news about any subject which demonstrates an impressive range of multimedia delivery: whether on current affairs, finance, entertainment, arts, sport, or niche topics.

Sponsored by eMobile The Mobile Application eircom Spiders 2O13 award is for application developers who have created apps for iPhone, Android and Smartphone. This award recognises a company or individual who has excelled within the mobile app space by developing innovative and smart mobile apps with useful context and is used by the mobile user especially where the nominee is deemed to be “first to market”.

Axonista’s CMS Ediflo integrates with broadcast scheduling and playout systems and powers applications and plugins for every device through which TV is viewed from Xbox and Roku to STB, tablets and smart phones.