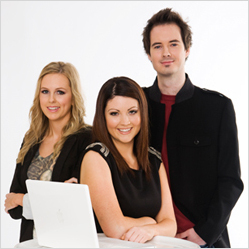 3e News hits your screens this Monday with a fresh, innovative, fast-paced show that will offer a new style of news for Ireland.

It will be the most interactive news programme on Irish television and it will have three new faces to get the message across.

It will feature web and internet stories, top downloads, Bebo, Twitter and Facebook updates as well as showbiz, sport and international news, along with the best of Irish content.

Aimed at a younger audience, 3e News marks a significant development for the new channel, which began its life as Channel 6.

3e received a huge boost recently with its recent move on Sky to number 105. Since its launch in January, 3e has proved extremely successful in targeting the under 35s with a broad range of programming including House, Dexter, 30 Rock, Family Guy and much more!

Images will be sent out to picture desks via Yousendit.

Caroline Twohig, 3e News Anchor
Caroline has a degree in television production after studying at Cholaiste Dhulaigh and the University of Wolverhampton. Caroline’s first job was with Octopus Productions in London and after satisfying her urge to travel, she joined TV3 five years ago as a production assistant in the news department.

After working as a researcher on Ireland Am, she moved back to news to work as an Associate Producer. She is also well known for anchoring bulletins on Q102.

Dublin-born Cassie Stokes is 22 and currently studying presentation and performance part-time in Ballyfermot College. She spent ten years of her childhood in the Canadian city of Toronto but returned to Ireland in 1997.

Cassie joined TV3 two years ago as a promotions assistant. She recently became a continuity announcer for 3e and is now looking forward to her first on-screen role.

Paul is from Clonbur in the sports mad county of Galway. He will be bringing you the top sports stories from Ireland and beyond. After studying in Ballyfermot, Paul got his first break in TV3 as a production assistant and hasn’t looked back since!

Paul has been with TV3 since 2005 working his way up the ranks of the sports department, including stints on GAA Championship Live and UEFA Champions League. His favourite team is Spurs, who he has followed (without much to shout about!) since the signing of Jurgen Klinsmann.