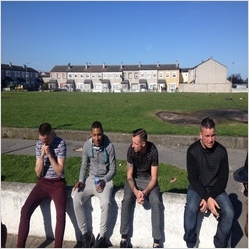 TV3 will continue to support the Irish film industry this Christmas with the World TV premiere of the biggest grossing Irish box-office hit of the year, ‘Cardboard Gangsters’.

TV3 and 3e will air all your favourite Christmas movie classics  including, ‘Santa Claus the Movie’, ‘Dirty Dancing’, ‘The Shawshank Redemption’, ‘Ferris Bueller’s Day Off,’ ‘Deck the Halls’ and ‘National Lampoon’s Christmas Vacation’.

Be3 will be the home of great drama this festive season with Christmas specials of ‘Victoria’, ‘Birds of a Feather’ and ‘Grantchester’.

Factual features on the festive menu with ‘That Was 2017’ which looks back on everything from the inauguration of Donald Trump to the resignation of the Tánaiste.

‘Coronation Street’ and ‘Emmerdale’ will keep viewers glued to the television with hour long specials on Christmas day.

New Year programmes to look forward to include the highly anticipated return of ‘Red Rock’, ‘The Voice’, ‘Dancing on Ice’, ‘Celebrity Big Brother’ and lots more.

A full list of programmes and times are in Notes to Editor.

TV3 will continue its commitment to supporting the Irish film industry with the World TV premiere of Cardboard Gangsters, which will kick off the festive schedule onMonday 18th December (9pm). In addition, TV3 Group will deliver a host of brand new programming specials and family favourite movies this Christmas.

On Tuesday 19th December on TV3 (7.30pm), this year’s ‘The Royal Variety Performance’  will keep you entertained  as viewers will see Britain’s Got Talent’s champion Tokio Myers take to the stage.

On Wednesday 20th December, Emmerdale fans are in for a treat as they will see Matthew Wolfenden aka David Metcalfe take to the stage in a brand new special, The Real Celebrity Full Monty (TV3, 9pm).This special marks the film's anniversary and will see six famous men replicate the film's iconic climax.

On Thursday 21st December, it’s all about the music, with a brand new special, The Nation’s Favourite Elton John Song (TV3, 10pm).This festive treat tells the story behind the 20 greatest songs ever recorded by Elton John.

On Saturday 23rd December, TV3 will have racing live from Ascotat 1pm with this year’s Long Walk Hurdle. At 10pm, it’s the movie classic, National Lampoon’s Vacation, followed by a brand new episode of The Graham Norton Show

(10.55pm). be3 leads the way with big drama as brand new Birds of a Feather Christmas Special airs at 10pm.

Christmas Eve, Sunday 24th December, is a movie day with plenty of great classics across the schedule to keep you cosy on the couch, including,  Mr Popper’s Penguin (3e, 6.05pm), Santa Claus The Movie (TV3, 3.45pm) and The Twelve Days of Christmas Eve (3e, 1.45pm). At 8pm, TV3 will air The Chase Christmas Special, followed by All Star Musicals (9pm). Then it’s over to Mario Rosenstock to entertain you for the night, with a brand new festive special, Mario’s Best Bits

(3e, 8pm). Soap fans can look forward to bumper hour long episodes of Emmerdale (7pm) and Coronation Street at (8pm) on TV3. On Christmas night,Brendan Grace will have you laughing with a brand new special Brendan Grace: A Night at the Opera House (TV3, 9pm), followed by family favourite, ‘Ferris Bueller’s Day off’ (TV3, 10.15pm). 3e will have viewer’s entertained with The Celebrity Juice Christmas special at 10pm and T2: Judgement Day at 11pm.

Sports fans are in for a treat on St Stephen’s Day, Tuesday 26th December, as TV3 has live horse racing from the Kempton King George at 1pm. At 6.30pm, the Xposé team takes us to the year’s most glamorous premieres and events with Xposé: On The Red Carpet.  Paul O’Grady hosts a canine festive special with a brand new Paul O’Grady: For the love of dogs Christmas Special at 8pm. At 9pm, it’s a double bill of Corrie, followed by the Irish classic comedy Waking Ned. Over on be3, it’s still all about the dramawith the highly anticipated Victoria Christmas Special

On Wednesday 27th December, 3e is the place for kids with family favourite movies including Flushed Away (12pm) and Alvin & The Chipmunks the Squeakquel   (6pm). Over on TV3, Irish film classic Into the West is at 5pm, followed by the Patrick Swayze classic Dirty Dancing (9pm).  Over on be3, its drama, with the all new Grantchester Christmas Special (9pm).

(TV3, 3.50pm) and Diary of a Whimpy Kid: Rodericks Rules (3e, 6pm). Then sprinkle some glitz and glamour to your evening as the Xposé ladies bring you all the celebrity interviews of 2017, from Victoria Beckham to Conor McGregor there’s something for everyone on Xposé: The Biggest celebrity Interviews of 2017t (TV3, 6.30pm ).Then at 10pm,its movie time with the comedy drama Last Holiday.

On Friday 29th December, Corrie fans are sure to have a laugh with all new The Funny Side of the Street at 6pm (TV3). This special is a light-hearted documentary looking back at some of the funniest stories and incidents throughout the many years that Coronation Street has been delighting viewers all over the world. At 9pm viewers can look forward to a film classic with The Shawshank Redemption (TV3).

As well as an entertaining Christmas line up, the New Year will see a wealth of new shows and series air across TV3 Group. Popular reality series Celebrity Big Brother returns(3e, 2nd Jan at 9pm), along with The Voice (TV3, 6th Jan at 7.30pm)and Dancing on Ice (TV3, 7thJan at 6pm).

See ‘Notes to Editor’ for a full Christmas programming guide.

The 12 Days of Christmas

Man About a Dog

The Flintstones in Viva Las Vegas

The Flinstones in Viva Rock Vegas

Night at the Museum

Alvin and the Chipmunks The Squeakquel