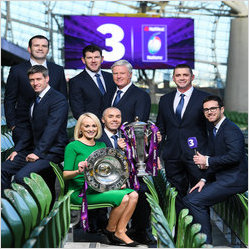 The presentation team will be anchored by Joe Molloy.

Alan Quinlan will join Dave McIntyre as part of the commentary team.

TV3 holds the exclusive rights to the NatWest Six Nations for the next four years.

At a launch event held in the Aviva Stadium today, TV3 introduced the presentation team and panel for its exclusive coverage of the NatWest Six Nations 2018.

Sports broadcaster Joe Molloy has been confirmed as anchor of TV3’s coverage. Joe was most recently part of TV3’s presentation team for the UEFA European Championships 2016 and has presented Newstalk’s ‘Off the Ball’ programme for the last five years.

Sinéad Kissane, TV3 Rugby Correspondent will be the touchline reporter with more additions to the team to be announced.

Commenting on the announcement, TV3 Group Managing Director, Pat Kiely said: “We are very excited and honoured to become the exclusive Irish broadcaster of the NatWest Six Nations. A tournament of this stature really deserves the calibre of production, presentation and punditry talent we are announcing today.

As part of the Virgin Media Group, TV3 has raised the bar over the last year and the addition of one of the highest rating events on Irish TV will help us build on this momentum and accelerate our growth into 2018.”

TV3’s coverage of the NatWest Six Nations begins on Saturday 3rd February 2018. All 15 matches of the tournament are live and exclusive on TV3 and 3player.

Pictures will be sent to your picture desk from Brendan at Sports File.

Notes to the Editor:

The Six Nations record points scorer with 557 points, Ronan appeared 128 times for Ireland, dropping the goal that secured the Grand Slam in 2009. Currently coaching with Top 14 side Racing Metro in Paris, Ronan is due to take up the position as Assistant Head Coach at New Zealand provincial side Canterbury in January.

A Grand Slam winner with Ireland, Shane made a habit of scoring memorable tries against England, including the match at Twickenham in 2006 to secure the Triple Crown in 2006 as well as an iconic try at Croke Park a year later. Shane won the Heineken Cup twice with Leinster before retiring in 2012.  He has become a respected analyst with Sky Sports and RTE as well as a columnist with The Sunday Times.

An experienced coach in Australia, notably with Super Rugby side NSW Waratahs, Matt moved to Ireland in 1999 joining Leinster, initially as defence coach, before taking charge of the province a year later, leading them to the inaugural Celtic League title in 2002.  His success with Leinster attracted Scotland to appoint him as their first ever foreign Head Coach. A teacher by profession, Matt is a gifted communicator and hugely experienced broadcaster.

An Ireland international, Shane captained Joe Schmidt’s Leinster side that enjoyed back to back Heineken Cup wins in 2011 and 2012.  A straight-talker, Shane was part on TV3’s Rugby World Cup 2015 panel.

Joe has been part of the TV3 presentation team in recent years, fronting some the UEFA Euro 2016 games, ‘The Sin Bin’ during Rugby World Cup 2015, ‘Extra Time’ during Euro 2016 and ‘Clubhouse’ earlier this year. A familiar voice to many, Joe has presented Newstalk’s Off The Ball for the last five years. He landed the prize as Best Sports Broadcaster at the PPI Radio Awards last year.

An experienced commentator across Rugby, Soccer and Gaelic Games, Dave covered the Rugby World Cup in 2015 for TV3. He has commentated on Champions Cup rugby for Newstalk and Sky Sports, Pro 14 for eir Sport as well as Champions League soccer for TV3.

Sinéad has been with TV3 since 2005 and has covered the Ireland team and the provincial sides as a Sports News reporter for the last 13 years. TV3’s touchline reporter at the 2007 and 2015 Rugby World Cup, Sinéad is also a columnist with the Irish Independent.