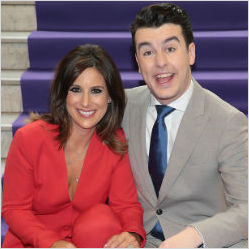 TV3 will also continue to be the exclusive Irish broadcaster of some of the best international shows including ‘Coronation Street’, ‘Emmerdale’, ‘The X-Factor’ and ‘I’m a Celebrity Get Me Out Of Here’.

Daily favourites ‘Ireland AM’, ‘Elaine’, ‘The Six O’Clock Show’, ‘Xposé’, ‘Saturday AM’ and ‘Sunday AM’ will continue to serve viewers with unique and relevant Irish stories every day.

TV3 Group today unveiled its New Season schedule in an event held at the National Concert Hall in Dublin. In its most ambitious schedule yet, the Independent Broadcaster made several major announcements across News, Current Affairs, Entertainment, Documentary, Drama and Sport.

Also new this autumn, Al Porter will play cupid to Irish couples looking for romance in the world’s most-loved dating show, ‘Blind Date’. A major studio production, this Irish version of a classic hit will take dating into the 21st century with a serious dose of nostalgia.

From love to heartbreak, Maia Dunphy will host new show ‘Heartbreak Hotel’. This uplifting and challenging format will see heartbroken singletons gather for a weekend retreat to face the true issues and reasons why they have been so unlucky in love.

Other major entertainment programming includes ‘Living with Lucy’ which will return for a second series. Lucy heads off to the homes of a variety of new well-known faces including GAA legend Davy Fitzgerald, Kerry politician Michael Healy-Rae and former Eastenders actress, Daniella Westbrook.

One of TV3’s most popular shows ‘Gogglebox Ireland’ will return for its third season. The show that got everyone talking is back and there will be some new armchair critics to talk us through the best and worst of the week’s “telly”.

Also, Marco Pierre White finds out which celebrity sizzles in the kitchen and which famous face flops in a brand new series ‘The Restaurant’.

Alongside new Irish entertainment, TV3 continues to be the exclusive broadcaster for some of the biggest UK shows including ‘The X-Factor’, ‘I’m a Celebrity Get Me Out of Here’, ‘The Voice’ and ‘Britain’s Got Talent’.

Sport on TV3 sees a major step-up into 2018 with the addition of exclusive rights to the ‘Six Nations’ for the next four years. TV3 will broadcast every game and with new preview and highlights shows, we will celebrate the biggest Rugby tournament in the world. As part of its build-up plans, TV3 today announced iconic Rugby pundit Ronan O’Gara would be joining its Six Nations panel. One of the biggest and most influential names in Irish and World Rugby of the past twenty years, Ronan will be a regular panellist and contributor to TV3’s coverage. Further details and presentation plans will be announced at TV3’s official Six Nations launch later this year.

TV3 will continue to be the home of top UK horse racing with coverage from some of the biggest meetings in the racing calendar including ‘The Cheltenham Festival’, ‘The Aintree Grand National Festival’ and ‘Royal Ascot’.

This year will see TV3 step up its commitment to News and Current Affairs output with the the launch ‘3News Ireland Hub’ on Monday, September 4th. A multi-million euro investment, the 3News Hub will be Ireland’s most technologically advanced News studio and will provide Irish audiences with enhanced news content and analysis available on more platforms than ever before. TV3’s flagship 3News at 5.30 will be broadcast live every day from this new News centre as well as 3News at 12.30 and TV3’s other bulletins on be3 at 7pm and 10pm.

TV3’s new current affairs programme ‘The Tonight Show’ will launch in September with presenters Matt Cooper and Ivan Yates. Broadcasting live every Tuesday, Wednesday and Thursday night at 11pm, Matt and Ivan will deconstruct the news and offer insight and their own very different perspectives on the stories Ireland is talking about.

Pat Kenny will return to debate the big issues that matter to you in ‘The Pat Kenny Show’.  With the live studio audience at the heart of discussions, Pat brings his own unique take on the big questions facing Ireland in health, housing, the economy and more.

Exploring key social and economic issues facing the island of Ireland, ‘David McWilliams’ Ireland’ will tackle a different topic every week in this four-part series. In a one off documentary, ‘Back to the Future’ David will also take a look at the nations spending, borrowing and continued property obsession and ask if we’re in danger of rewinding back to recession.

Leading Irish journalist and broadcaster, Sarah McInerney joins TV3’s Current Affairs line- up with ‘The Sunday Show’. The weekly show will see Sarah review the news and politics of the week with a host of invited guests and regular contributors including TV3’s new Political Correspondent Gavan Reilly.

Under the documentary strand ‘True Lives’, comes a number of compelling new documentaries including ‘Killer in the Family’, a look at murder-suicide in Ireland; ‘Baby Hater’, sees comedienne Joanne McNally question why people think she’s wrong to not want kids. Presented by Paul Williams, ‘Ireland’s Jihadis’ takes a look at the threat of radical extremism in Ireland. ‘Ireland’s Refugee Hotel’ looks at how the local community react to their new neighbours when 240 Syrian refugees arrive to an abandoned hotel in a remote town in the west of Ireland.

A new, four-part documentary series ‘The Babymakers’, will follow the stories of six couples as they embark on the often harrowing but always hopeful journey of IVF at one of Ireland’s most established fertility clinics.

New Access documentaries are at the heart of TV3’s schedules into 2018, with BAI supported series ‘Fota Wildlife Park’, ‘Along Home Shores’ and ‘The Town: A Year in Portlaoise’ all bringing us closer inside the world of some unique and truly Irish stories and characters. ‘Rare Breed: A Year on the Land’ also continues into its' fifth season. TV3 is also back on the frontline with The National Ambulance Service in Paramedics, and is surrounded with more creature comforts and stories from the animal shelter in ‘Dogtales’.

TV3 will have more original and commissioned Irish drama than ever before. All-new, six-part series ‘Darklands’ is a crime drama set amidst a gang-war in Dublin's inner-city and tells the story of Damien Dunne, a 16-year-old boy in his final year of school who dreams of becoming a professional MMA fighter.

From the makers of ‘The Guarantee’, ‘The Bailout’ is a two-part drama series that tells the story of Ireland’s government, led by Brian Cowen, as it desperately tried to avoid handing over governance of the economy to outsiders.

TV3’s daily home-grown shows, ‘Ireland AM’, ‘Elaine’, ‘The Six O’Clock Show’, ‘Xpose’, ‘Saturday AM’ and ‘Sunday AM’ continue to be the backbone of TV3’s schedule, delivering relevant news, views and entertainment to viewers throughout the day.

“Over the last year we have transformed the TV3 business and developed a more relevant and consistent schedule which viewers have backed. We have made great progress in terms of audience growth and programme quality. Building on this, we are delighted to announce significant new additions to the schedule alongside returning hit shows. This New Season line-up reflects TV3’s growing scale and ambition as we drive investment in Irish content, studio infrastructure and independent production.

In an increasingly competitive and ever-changing media landscape, I am hugely excited about the growing momentum around our channels and the future potential to build on this as part of the growing Virgin Media connected entertainment business.”

“Today is about setting a new tone and a new level for TV3. We are raising the bar higher than ever before with our most ambitious plans yet, with very significant announcements across every genre: Sport, News and Current Affairs, Drama, Factual and Entertainment.

We have game-changing announcements across the board and across the schedule, from Six Nations and the new 3News Hub to The Tonight Show, Blind Date and Ireland’s Got Talent and that is just the tip of the iceberg. This New Season Launch is defined by Irish stories and Irish programming and is the result of great investment in studios, in content, in talent and in people.”