Irish documentary inspired by Parkinson?s Disease to air this Monday on TV3. 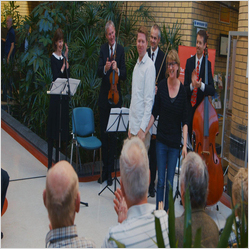 Irish documentary inspired by Parkinson’s Disease to air this Monday on TV3.

The moving story of how a composer, a team of dedicated medical professionals and patients with Parkinson’s Disease come together to create an inspirational piece of music.

The creative ensemble is completed by poet Leontia Flynn, three members of the Irish Chamber Orchestra and by the actress, Ingrid Craigie, who performs Leontia’s words at the final performance.

Interviews are available on request.

A Disconnected Rhythm is a moving arts documentary created at the point where two disciplines intersect: the medical and the artistic. It follows composer Ian Wilson’s collaboration with the National Centre for Arts & Health as he creates a work of art inspired by Parkinson’s Disease. The touching story documents how a composer, a team of dedicated medical professionals and patients with Parkinson’s Disease come together to create an inspirational piece of music.

Produced by John Kelleher Media for TV3 under the BAI Sound & Vision Scheme and directed by Shimmy Marcus ('SoulBoy', 'Good Cake Bad Cake: The Story of LIR'), this documentary charts Ian’s five week stint as ‘Composer in Residence’ at Tallaght Hospital. It follows the project’s progress, primarily through Ian’s eyes, as he attends consultations and treatments, meets patients and their families and observes the doctors who are passionate about the therapeutic value of art.

Ian Wilson, whose work has been performed at Carnegie Hall, the Royal Albert Hall and the Venice Biennale, is not the only artist involved. He collaborates with young award-winning poet, Leontia Flynn, whose first collection ‘These Days’ was shortlisted for the Whitbread Poetry Prize.  Over the course of the project, they make weekly visits to the hospital, engaging with doctors, nursing staff and patients. The creative ensemble is completed three members of the Irish Chamber Orchestra and by the actress, Ingrid Craigie, who performs Leontia’s words at the final performance.

The role of art in healthcare, and its therapeutic value in particular, is an idea that holds great sway at Tallaght Hospital, where we meet gerontologist, Professor Des O’Neill together with his dedicated team of doctors and specialist staff.

Prof. O’Neill talks about his goals and hopes for the project: “My key goal here is to get your insight and the insight of the musicians into what they see emerging of the person with Parkinson’s Disease. I think a secondary goal out of it would be, is perhaps to get some sense of the work of what’s done with people with Parkinson’s Disease. How through the therapies, whether it’s medical, nursing, speech and language therapy, physiotherapy, how people can be somewhat liberated from those shackles. And one of the other things I’m really looking forward to is the final concert and I think this symbiosis, or bringing together of poetry and music looks like a winning combination.”

Nearly everyone in Ireland knows or knows of someone with Parkinson’s Disease. A Disconnected Rhythm provides a fresh perspective on this debilitating illness and gives the public a greater understanding of what it means to live with the condition. The film culminates with a performance of ‘Matter’, Ian’s original composition, at the Adelaide & Meath hospital in October 2013, in the presence of patients, doctors, family and friends.

Patients’ feedback and input during the rehearsal process has directly inspired the composition – in a very real way, the original music and prose created is not only for them and about them, it is also by them.