TV3?s Alan Hughes hopes Marriage is on the cards. 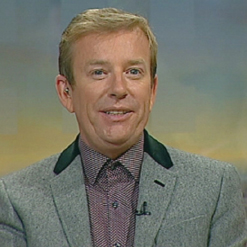 TV3’s Alan Hughes hopes Marriage is on the cards.

Following an interview with Eurovision winner Conchita Wurst about her appearance at Gay Pride, Alan Hughes joined his co-anchors Sinead Desmond and Anton Savage on the Ireland AM couch to discuss his right to marry.

Alan has been in a civil partnership with partner Karl Broderick since 2011 but if the right to gay marriage was passed he would marry as it is a ‘basic human right’.

He also stated that there is a misconception that people only want the right to gay marriage so that they can adopt or have children, which is not the case with him.

Following an interview with Eurovision winner Conchita Wurst about her appearance at Gay Pride, Alan Hughes joined his co-anchors Sinead Desmond and Anton Savage this morning (Wednesday 2nd July) on the Ireland AM couch to discuss his right to marry. Alan has been in a civil partnership with his partner Karl Broderick since 2011 and he explained that his desire to marry is nothing to do with children.

“There are so many people who want to get married and who have no interest in adopting children or having children or going down that road, it’s just a right to be able to say I’m able to get married, I have a marriage certificate. I mean the children thing is not going to affect me because I don’t want to have children and Karl doesn’t want to have children but for those who do, there are so many rights there that need to be sorted and by being legally married, will be sorted at that stage and that’s what people in this country who are gay and lesbian are looking for.”

When Sinead brought up a recent Red C Poll which showed that 76 percent of Irish people were behind gay marriage, Alan said he does not believe this to be a true picture.

“I don’t think it would be carried by 76 percent. You would hope that in this day and age, if that referendum wasn’t carried next year it would be such a kick in the teeth to people who are in love and want to be married and want to feel equal and for the country to turn around and say no, you’re not equal.”

When asked what the difference between a civil partnership and marriage meant to him, Alan said:

“Just to have that I am allowed to be married like any other person in the country. It seems like a basic human right to be able to be married to someone which at the moment you cannot do.”

Alan explained that he just wants to be equal with heterosexual couples.

Would crusade for this and would marry just to have certificate.”