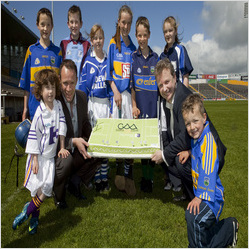 TV3 ANNOUNCES GAA LINE UP FOR THE 2009 CHAMPIONSHIP SEASON

TV3 today announced its GAA line up for the forthcoming season. All live matches will be hosted by Matt Cooper. Matt will be joined in studio by expert panellists for each match including Peter Canavan, Eugene McGee, Senan Connell, Daithí Regan, David Brady, Liam Hayes, Jamesie O'Connor and Liam Griffin.

TV3’s championship team will include, commentator Mike Finnerty and his co-commentators Joe Kernan, Paul Earley and Nicky English while TV3’s Gaelic Games correspondent Kieran McSweeney and TV3’s sports reporter Sinead Kissane, will be transmitting the atmosphere of the occasion and getting the views from the players and the fans.

In addition to the live coverage, TV3 will broadcast a new look "Championship Throw -In" from Friday May 29th. TV3's Gaelic Games corerepsondent Kieran McSweeney and Sinead Kissane will be on the road travelling the country bringing the latest team news, views and action from the 2009 Championships.

Commenting at the launch today David McRedmond, TV3 CEO said: "In the current economic climate, coming to the bithplace of the GAA is a great reminder of how far our national games have gone. TV3's coverage will take us all the way from Hayes Hotel to Croke Park for a brilliant summer of Gaelic Games."

Commenting on TV3's live matches Criostóir Ó Cuana, GAA President said: "It’s fitting that TV3 should journey to Thurles to celebrate the GAA’s 125th Anniversary today ahead of what will be their second campaign as broadcast partners to the Association. This is where it all began for us as an Association back in 1884 and this summer Thurles will host more important GAA activity with Sunday’s eagerly awaited GAA Hurling Championship meeting of Tipperary and Cork just one stand out fixture. We hope games such as this will help to illuminate the summer, especially in this milestone year for the Association and we look forward to working with TV3 in projecting a positive image of our games over the course of championship 2009 and beyond."

TV3 Championship Live Presenter Matt Cooper said: “I’m thrilled to be back with TV3 this year to host our coverage of what promises to be some very exciting games. I really enjoyed working with a top team of analysts and producers last year, whose expertise added greatly to the viewer’s enjoyment of the games and I’m delighted that they are all back again this year.”

Images taken at the launch are available courtesy of John D Kelly at +353 86 820 9536 or johndkellyphoto@eircom.net

Notes to the Editor:

Matt Cooper (Presenter) Live match presenter Matt Cooper’s regular day job is as presenter of The Last Word radio programme on Today FM each weekday between 4.30pm and 7pm. It was the top-rated programme in its time slot in 2008 and includes substantial sports sections on Monday and Friday that include extensive GAA coverage with a panel of football and hurling experts. Matt’s interest in GAA goes back to his childhood, as a footballer and hurler with the Bishopstown club in Cork up to and including minor level. He was schooled at Cork’s famous hurling academy, the North Mon. He is an experienced TV sports presenter and a former newspaper editor.

Peter Canavan (Panellist) Peter Canavan played for Tyrone for sixteen years winning two All-Irelands and six All Stars. Affectionately known as Peter the Great he has been one of the foremost personalities of recent GAA history. A teacher by profession, Canavan regularly contributes columns to Newspapers and has contributed to Newstalk’s ‘Off the Ball’ and ‘The Last Word’ on Today FM.

Eugene McGee (Panellist) A journalist by profession, Eugene McGee has managed both Offaly and Cavan at Inter-County level leading the former to All-Ireland glory when they denied Kerry the five in a row in 1982. A columnist with the Irish Independent and a regular contributor to ‘The Last Word’ on Today FM and ‘Off the Ball’ on Newstalk he has also worked as an analyst on Setanta Sports National league coverage.

Senan Connell (Panellist) Senan retired from Inter County football in 2006 having secured his third Leinster title with Dublin, the Grand prize of Sam Maguire having eluded him. A teacher in St. Declans school in Cabra, he has become a recognised figure in media circles because of his tactical and technical expertise.

David Brady (Panellist) David has spent 14 years as an Inter-County player with Mayo. He has won a National League Medal with Mayo and a club All-Ireland with Ballina and has long been recognised as one of the most articulate and outspoken personalities in the GAA. A former Youth Rugby International he has played under some of the best Managers in Gaelic Football.

Liam Hayes (Panellist) Liam won two All-Ireland medals as a player with Meath and later served as manager to Carlow. A journalist/Publisher by profession Liam has started and sold titles such as The Title and Ireland On Sunday. Liam now owns The Gazette Group of local newspapers. He writes a weekly football column for the Sunday Tribune.

Jamesie O'Connor (Panellist) Jamesie O’Connor was scorer in chief for the Clare team of the late 90s and early part of the new millennium. His accuracy helped propel the banner county from Munster also rans to double All-Ireland winners. Having retired in 2005 he now combines his position as a teacher at his Alma Mater the famed St. Flannans hurling nursery with print, radio and television work.

Nicky English (Panellist) Nicky English was one of the most accomplished hurlers of his era winning two Liam McCarthy Cups with Tipperary in 1989 and 1991. In fourteen years playing with the county he scored 20 goals and 117 points in Championship hurling. In 1999 he took over as manager of the Tipp Senior team and led them to their last All-Ireland title in 2001. A respected commentator on the game he has made numerous contributions to Television and Radio programmes. He is Chief Manager of Marketing and Sales with AIB Finance.

Joe Kernan (Panellist) Joe was established as one of the greatest Armagh players ever when he had his first spell in charge of Armagh as a manager, he did not have a great deal of success and returned to Crossmaglen as club manager. Since taking over the Rangers he has had unprecedented success leading the club to All Ireland’s and then Armagh to the Sam Maguire in 2002. He led Armagh to Ulster Final Success in recent years and stood down as manager last year.

Liam Griffin (Panellist) One of the most articulate, outspoken, hurling analysts of the last decade. Best known as the man who led Wexford out of the wilderness in 1996 when they won their only All Ireland of the last 40 years. A successful hotelier by profession he writes a weekly column for The Sunday Tribune and is a regular on ‘The Right Hook’ on Newstalk.

Daithí Regan (Panellist) Daithí Regan won two All-Ireland medals with Offaly in 1994 and 1998 when they pulled off two of the biggest upsets in hurling history. Since retiring he has become a regular contributor to local and national newspapers and his contributions to Newstalk’s "Off the Ball" programme have become a must for all hurling fans.

Paul Earley (Panellist) Paul Earley is a former Roscommon Footballer who won Connacht Championships in 1990 and 1991 as well as an All Star at full forward in 1985. One of the first Irish players to be recruited to Australian Rules he made one appearance with Melbourne in the AFL before returning home for family reasons. A respected pundit, Paul has made regular contributions to Setanta Sports live GAA output and weekly preview show.