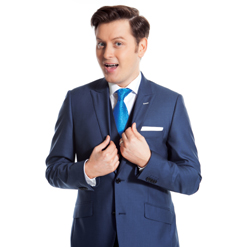 Brian Dowling is confirmed as the host of TV3’s new Saturday night entertainment show ‘Sitting On A Fortune’.

‘Sitting On A Fortune’ is a 3Studios / RDF co-development, and is the FOURTH major production from the TV3 Sony HD Studio in 2014.

‘Sitting On A Fortune’ goes into production in June and is scheduled to air on TV3 later this year.

Brian Dowling is available on request for phone interviews.

TV3 has confirmed Brian Dowling as the host of its new Saturday night entertainment show Sitting On A Fortune. The 10 x 60 series, a co-development and co-production between 3Studios and RDF Television, will begin filming in the TV3 Sony HD Studio this June with an air date scheduled for the autumn.

Since being crowned the winner of Big Brother in 2001, Brian Dowling has forged a career as one of Britain's best loved TV personalities. He has previously presented the BAFTA Award winning SMTV Live, Big Brother and Celebrity Big Brother, as well as The National Soap Awards. In Ireland he co-hosted Wagon’s Den on RTE and The Big Fat Breakfast Show.

On a set dominated by super-sized chairs, Sitting On A Fortune will see three couples take turns to sprint to the games area to take on a fiendish puzzle. All the time they’re away from their chair, their rivals earn money. Once they think they have solved the puzzle, each couple must race back and sit down again, but they’ll only cut off the cash to their rivals if they’ve been successful.

It’s a game where quick feet are as important as quick thinking, as only one couple can reach the end game where they’ll have a chance to literally sit on a fortune…

TV3 will record Sitting on a Fortune over two weekends in June. A studio audience of 150 people will be invited to each of the shows over the two weekends. Those wishing to be part of the audience can apply by visiting www.tv3.ie/takepart.

It is estimated that over 5000 people will pass through the doors of the TV3 Sony HD Studio before the end of this year. Other shows that will be produced using the studios impressive facilities include The Algorithm, and series 2 of The Lie as well as a new comedy show with Jason Byrne and the ongoing series of The People’s Debate with Vincent Browne.

RDF Television, who is behind UK shows such as the hit game show Tipping Point, Tipping Point Lucky Stars, Wife Swap and The Secret Millionaire is a Zodiak Media company. Sitting on a Fortune will be distributed internationally by Zodiak Rights.

Brian Dowling, the host of Sitting On A Fortune, said: “I’m so excited to be part of the Saturday night lineup on TV3. It’s especially great to be back in Ireland doing what I love to do. I hope I can bring some fantastic family entertainment to everyone watching.”

The continuous stream of productions emanating from 3Studios demonstrates TV3’s increased investment and commitment to home production. The station is strategically positioning itself as a producer of large scale entertainment shows fit for international acquisition. Some of its recent productions, including Brain Hacker, and The Lie have been sold as formats worldwide. To date, Brain Hacker has sold to over 76 different countries while a French pilot of The Lie is currently being produced.

‘Sitting On A Fortune’ hosted by Brian Dowling is coming soon to TV3.

Images of Brian will be sent to your picture desks this afternoon.

Andrew Byrne, TV3 Group Head of Formats, said: "We are delighted to be working with RDF TV, one of Europe's leaders in entertainment programming. RDF's decision to co-produce with TV3 in the state-of-the-art TV3 Sony HD Studio Dublin is a further endorsement of Ireland's status as a test-bed for international formats".

Peter Usher, Executive Producer for RDF TV, said: “Sitting On A Fortune has it all - you’ve got to form an unbreakable bond with your partner, answer speedily, move even more quickly, and avoid at all costs being left standing. Contestants need quick minds, fast feet and nerves of steel.”

About Sitting On A Fortune

Sitting On A Fortune will see three couples take turns to sprint to the games area to take on a fiendish puzzle. All the time they’re away from their chair, their rivals earn money. Once they think they have solved the puzzle, each couple must race back and sit down again, but they’ll only cut off the cash to their rivals if they’ve been successful.

It’s a game where quick feet are as important as quick thinking, as only one couple can reach the end game where they’ll have a chance to literally sit on a fortune…

career as one of Britain's best loved TV personalities and in 2010 was crowned  the winner of Ultimate Big Brother on Channel 4, which is testament to his popularity with the general public who themselves vote for the winner.

He holds the record for never once being up for eviction during his two stays in the house.

Brian is a very experienced radio and television presenter, who is happy fronting both live and pre-recorded shows. For nearly two years he fronted the BAFTA Award winning SMTV Live before going on to helm Big Brother and Celebrity Big Brother for three years after its move to Channel 5 in 2011.

He's also been busy on ITV2 hosting The National Soap Awards - Lets Party and The National Television Awards After Show Party, is a regular face on ITV1's This Morning and fronted three series of a hugely successful Irish series for RTE, Wagons Den as well as the popular The Big Fat Breakfast Show.

He has gone on to lend his recognisable voice to narrate popular television and radio programmes for broadcasters including the BBC and Channel 4. He regularly presents and works for many corporate companies including The Clothes Show Live, Top Shop, Britannia Airways, Vodafone, Glamour Magazine and has been the voice of numerous TV advertisements. He has also hosted many prestigious events, including the Variety Club Showbusiness Awards, Elle Style Awards and the First Light Film Awards. Brian has also fronted huge live events, like Party In The Park and 02 In The Park.

Launched in 1998, TV3 is the largest commercial channel in Ireland with an 11% market share for Adults 15+, reaching over 2.6 million individuals each week and over 3.6 million individuals each month. TV3 has a bigger market share for Adults 15+ than BBC1, UTV, Channel 4 and Sky 1 combined. Today, TV3 Group has firmly established itself as the leader in TV entertainment in Ireland.

The development of the brand new TV3 Sony HD Studio has allowed for the production of bigger formats and even better content for distribution – giving scope for greater impact in the international market.

RDF Television is the largest production company within Zodiak Media. It has offices in West London and Bristol. It was founded in 1993 and has established an outstanding reputation for producing popular and innovative programmes across programming genres of Entertainment, Factual Entertainment, Comedy, Documentaries, and Daytime & Features.