Home > Press Centre > TV3 TAKES TO THE ROAD TO PROMOTE THE RETURN OF THE HIT SERIES, GLEE

TV3 TAKES TO THE ROAD TO PROMOTE THE RETURN OF THE HIT SERIES, GLEE 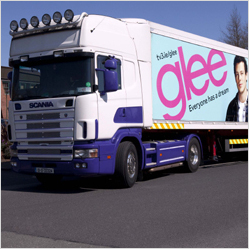 To promote the return of the hit television series Glee, TV3 is advertising Glee on truck sides on major Irish road networks

With fun, bright and colourful images of the Glee cast on both sides of the trucks and the infamous Sue Sylvester on the rear, they will create huge impact as they attract instant public attention

To promote the return of the phenomenally successful, multi-award winning series Glee, TV3 has taken out advertising for Glee on the side of trucks circulating nationwide across Irish roads thanks to MMA Advertising.

Glee is an outstanding musical comedy that deftly combines humour, music and drama with an extremely talented cast and TV3 is airing the programme just 24 hours behind the U.S. - before any other channel in Europe! Glee follows an optimistic high school teacher as he tries to transform the school’s glee club and inspire a group of ragtag performers to make it to the biggest competition of them all: Nationals. The series also features an incredible soundtrack of all your favourite hit songs from the past and present, including the glee club’s rendition of Journey’s ‘Don’t Stop Believing’, which has already over 7 million hits on YouTube!

MMA Advertising was established with the vision to be the leading mobile truck advertising company in Ireland, covering all national road networks throughout Ireland and the UK. MMA Advertising is affiliated with the Molloy and Sherry Transport Group, one of Ireland’s largest and most established transport groups with over 1000 units. The artwork is digitally printed on front-lit PVC in full colour detail and is a part of their frame system fixing. The panel sizes are 96 sheet with a super rear back panel and have a production time of 10 working days on receiving artwork. Other companies which have effectively advertised with MMA Advertising include ‘Snap Printing’ and ‘Subway’.

These monstrous trucks will create a huge impact with their fun, bright and colourful images of the Glee cast on both sides of the trucks and with the infamous Sue Sylvester on the rear they are sure to attract instant public attention covering all national road networks throughout Ireland.

TV3’s Head of Marketing and Publicity, Teresa Murray said: “This cost-efficient and effective means of advertising is a new high-impact medium of marketing for TV3 and is proving to be extremely successful for us. We are delighted with the benefits of having on-site and roadside advertising which can be seen nationwide”